Kiwi are omnivores which means they eat a bit of everything! Their gizzards usually contain grit and small stones to help with the digestion process.

A little bit of everything

Because kiwi live in such diverse habitats from mountain slopes to exotic pine forests, it can be difficult to define a typical kiwi diet.

Most of their food is made up of invertebrates, and a favourite is native worms which can grow to more than 0.5 metres. Luckily for kiwi, New Zealand is rich in worms with 178 native and 14 exotic species to choose from.

The kiwi’s breeding success is closely related to its diet. The birds need to build up large reserves to get through the breeding season so if the season has been particularly hard due to drought or flooding, their breeding season may not be as good as usual.

Brown kiwi have been known to eat bracket fungi and frogs, and capture and eat freshwater crayfish/koura. In captivity, kiwi have even fished eels/tuna out of a pond, subdued them with a few whacks, and eaten them.

Kiwi can get all the water they need from their food. In fact, juicy earthworms are 85% water! This adaptation means they can live in particularly dry places such as Kapiti Island.

Being nocturnal also helps because they don’t get hot, bothered, and dried out by the sun.

When it does drink, a kiwi immerses its beak, tips back its head, and gurgles down the water. 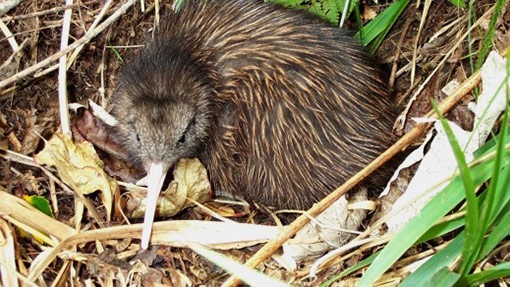