Already impressed with the kiwi’s long snoz? Our national icon is also the only bird in the world with external nostrils at the tip of its long beak.

While the kiwi’s eyesight isn’t great, the parts of it brain devoted to smell and touch are enormous.

A kiwi’s olfactory bulb is the second largest among all birds relative to the size of its forebrain, giving it an exceptional sense of smell, just second to the condor. This helps kiwi locate food beneath the soil and in leaf litter.

More recently, research has discovered that the kiwi’s beak does much more than smell very well. Massey University PhD student Susan Cunningham found that kiwi have sensory pits at the tip of their beaks which allow them to sense prey moving underground. In fact, the research suggests that feeling the prey’s vibrations may be more important to a hungry kiwi than smelling it. Instead, smell may be mainly used to explore their environment.

The finding surprised researchers. Other probe-feeding birds, such as godwits and sandpipers, also have remarkably sensitive bill-tip organs to pick up prey vibrations, but these shorebirds are only very distant relatives of kiwi. It may be an evolutionary example of two distantly related animals independently coming up with the same solution to the same problem.

A probe & a lever

As it walks, the kiwi taps the ground with its beak, probing the soil and sniffing loudly. It can locate an earthworm up to three centimetres underground. Once a snack has been located, the kiwi pushes its beak deep into the earth. To protect the opening, the tip of the upper beak overlaps the lower one.

The kiwi can use its beak as a lever, moving it back and forth to widen the hole. Sometimes it uses its entire weight to drive the beak deeper, kicking its legs up in a kind of headstand.

Once it has hold of the delicate worm, the kiwi moves very carefully because worms break easily. Sometimes a steady pull will do the job.

Sometimes the kiwi remains motionless until the worm relaxes its grip on its tunnel, and then it gives another tug.

Having nostrils at the end of its beak helps the kiwi make the best use of its ground-based habitat and gives it an advantage over other birds. But this hunting strategy has drawbacks. Kiwi can often be heard snuffling and snorting loudly to clear dirt from their nostrils. 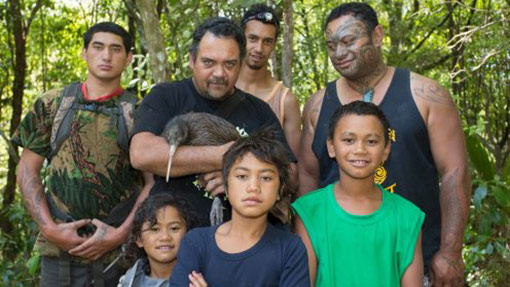