Coming Home to the Raukumara 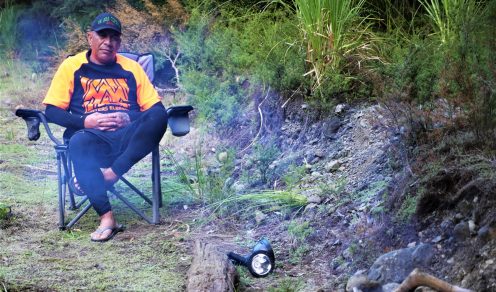 When Wiremu “Wongi” Wharepapa was given the chance to return to his whenua (land) and his iwi (tribe) to work, he jumped at the chance.

“I had been working at KiwiRail in Hamilton for 10 years and was well taken care of, but when Kiwis for kiwi gave me the opportunity to come home and work alongside my iwi, Te Whānau-ā-Apanui, to help start the long journey of restoring the Raukumara forest, it was a dream come true.”

‘Home’ is a small settlement on the coast between Ōpōtiki and East Cape, in one of the most isolated parts of New Zealand. The imposing Raukumara ranges form the backdrop of this remote, undeveloped corner of the country. The terrain is wild and unforgiving and there are no tracks through the forest, which makes for an appealing challenge for very experienced hunters.

But over the last few decades, the Raukumara forest has severely suffered at the mouths of predators and intensive deforestation. Herds of deer have wiped out almost all vegetation on the forest floor, and the bird life is next to none.

“When I first arrived home and went into the bush, it was very hard to see what had happened to our whenua,” remembers Wongi. “It was total devastation in there. The deer population had eaten the entire vegetative understory; the only plants that are left are on the sides of waterfalls where they can’t reach. The bird noise is virtually zero, hillsides are sliding away because there’s nothing holding them together, and cliffsides are collapsing into the river below. The Raukumara is like a shallow, empty grave. It can bring a grown man to tears.”

Wongi says even the predators are suffering.

“I’m a hunter and I came home to basically clean the place out, but now my mind has gone out of hunting and I’m feeling more like a conservationist. I’ve gone from hunter-gatherer to kaitiakitangi, guardianship of the forest.

“A few weeks ago, a group of us stumbled across a deer that was lying on the ground. It wasn’t injured or shot; it was starving. It was really sad to watch, to see that the forest is no longer providing nourishment to our native taonga but also the predators that wiped it out in the first place.”

Wongi works in Kiwis for kiwi’s hapū activator team, a role that has been funded by Jobs for Nature. His role is essentially advocacy and engagement between everyone who is attached to the Raukumara and wants to restore it to its former glory.

“One of the biggest reasons I came home was to reconnect my people,” says Wongi. “I felt like our iwi, our tāngata (people), were disconnected from the bush, from Tāne-Mahuta, from everything. I engage with our rangatahi (younger generation), hapū (subtribe) on the marae, and kura (schools), as well as people outside of our iwi like regional councils and the Department of Conservation.

“My role is to work with everyone to set aside historical differences and come together to work on a common goal which is to breathe new life into the Raukumara.”

Wongi’s work is vast and varied. He helps set up training programmes for trapping, aerial shooting, and other predator control measures, along with GIS mapping and water testing in the rivers. His long-term goal is to create a healthy, flourishing habitat so native birds, including kiwi, can one day return to the Raukumara.

Wongi is philosophical about his work though.

“I know that I probably won’t ever see a kiwi return to Raukumara in my lifetime,” he ponders. “It’s going to take a lot of work, a lot of time, and a lot of collaboration between a lot of people to restore the forest.

“But I hope that the work that I’m doing now will leave a legacy that one day kiwi will be roaming freely through the Raukumara, and I thank Kiwis for kiwi and Jobs for Nature for giving me this opportunity to make a difference to my whenua, my iwi, my tamariki, and my mokopuna.”

The Jobs for Nature programme is investing more than $1.245 billion in jobs for 11,000 people that will restore our rivers, protect precious places, and ensure our native wildlife thrives. The Department of Conservation is responsible for allocating $500 million to partners and projects that will create 6,000 nature-based jobs over a four-year period.

Jobs for Nature funding for Kiwis for kiwi projects will create more than 200 full time equivalents (FTEs) over a five-year period and will supercharge kiwi conservation projects, including predator control, kiwi avoidance training for dogs, and Operation Nest Egg. The funding will be managed by Kiwis for kiwi, together with the Department of Conservation.