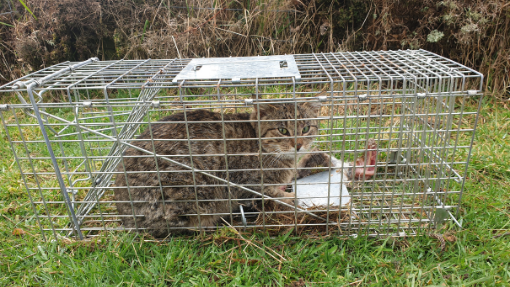 This month I want to touch on a subject that has many people have avoided. You probably all know the subject I am referring to just by reading those few simple words. Yep, that’s right: feral cats.

Now let’s be clear on a couple of points.

The subject of pet cats is one that is making the news more and more. And while this blog is not about pet cats, I think it’s important to make a couple of points about them.

This blog is about feral cats. Some pet cats are killers and some are not. But with feral cats, ALL are killers. They have to be, or they die. You can’t blame them for that. To compare a domestic cat with a feral cat is like comparing a Labrador with a hyena! Unfortunately, some people don’t see a difference and they have got people in conservation running scared.

The cat issue is not a discussion about cats; it is a reflection of the way society is going. We are flat out giving animals human names, personalities, and attributes and there are calls now for animals to have the same rights as people. The word is ‘anthropomorphism’. Remember that word, folks. It will have an impact on many aspects of conservation in years to come.

I live in a rural area where there’s a healthy population of feral cats. They often live free and easy because everyone thinks they belong to someone else. It’s the same throughout New Zealand. What the people with pet cats don’t realise is that feral cats can have a huge impact on their pets – and not just the odd dust-up outside the bedroom window at night.

No, cats, as with all creatures, are in a constant state of push and pull when it comes to territory and resources. A domestic cat is viewed purely as competition by a feral so it must defend its territory if it wants to keep it. This can create real stress, especially if the pet cat is sub-dominant as they often are. There’s also the risk of disease.

Feral cat numbers in the landscape have boomed in recent years. I know of projects that are removing them in the hundreds each year, when they used to remove them in the tens. Why is this? Quite simply, it’s because of food. Milder winters are growing their prey populations quite nicely and feral cats are riding on the crest of that wave. Rodent numbers are bigger in many forest areas too from what I am seeing, thanks to more fruit and seed and nicer weather. I am seeing feral cats in more and more remote parts of the country, from wetlands to the high peaks in both islands. I have seen feral cats and sign in all. And some of them are really big. I think this is probably where the panther stories may come from.

People often blame feral cats on dumped cats and there is no doubt that it happens. But my view is that it happens a lot less than we think. In most cases, ferals are many generations wild where only the fittest survive. The tame has gone out of them. Sure, you might be able to tame the odd one up but my experience with feral cats is that they can be incredibly aggressive.

Cats in the right conditions can breed rapidly and their numbers can go up quickly. Near kiwi populations I always look closely at the feral cat population when I want to consider the ferret risk. Cats ride the top of the food wave and ferrets come along in behind.

A question I get asked a lot is will feral cats prey on kiwi? From what I’ve seen the answer is ‘yes’, but not often. I have been in areas of both high kiwi and cat abundance and been out at night where the two were close together and seen no indication of it. The kicker here is that any predator will prey switch if their preferred food disappears. It just makes sense. A project I work with has just had a kiwi killed and it looks like it was a cat.

When controlling feral cats in kiwi areas there are some quite defined requirements with regard to what you can do. For example, all kill and leg hold traps must be 700mm above the ground to keep kiwi safe. When considering feral cat control, I would urge you to research the national and legal requirements around that. Many of our kiwi live close to built-up areas and dwellings too, so I would also urge you to consider the risk to pets with what you do. I know that many people are simply anti-cat, but I like to come at everything from a perspective of mutual respect. There are things you can do to remove feral cats while avoiding risk to domestics.

We could talk at length about methods, but that is a subject for another time. What I will say is that in my experience, feral cats are the most cryptic, cunning, savvy, and cautious of all our introduced predators in New Zealand. They are the top gun of our predators and have my absolute respect. If you want to be effective and successful, you need to bring your A-game – and treat them with respect and kindness. They didn’t ask to be here. They are simply doing what is natural to them.

Till next time. Good hunting on the trap lines. Make me proud.