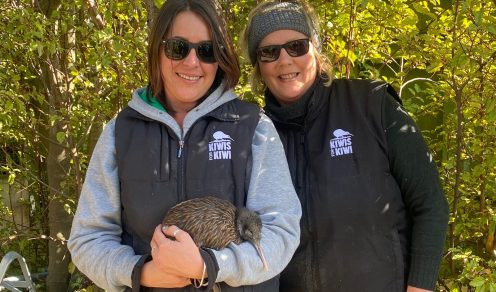 In October last year, we opened the doors to our newest facility. Earlier this week, we bid farewell to the last chick to be returned to the wild this season.

When kiwi chicks are hatched and reared in incubation facilities that feed into predator-free kōhanga sites like fenced sanctuaries or islands, they can be released into the wild at just three or four weeks old.

But what happens in areas where a kōhanga site doesn’t exist? The answer: A kiwi crèche.

In October 2020 Kiwis for kiwi proudly opened a kiwi crèche facility in Napier. The main focus of this facility is to rear chicks that have been hatched at The National Kiwi Hatchery in Rotorua, until they reach a ‘stoat-proof’ weight of around 1kg. At this point (after around three months at their temporary ‘home away from home’) they’re released into predator-managed habitat in the wild.

On August 4th, the last chick of the season known as “Tai” was released into the Maungataniwha Native Forest, officially marking the end of a very successful first season of operation.

95% of kiwi that hatch in the wild die before they reach breeding age. Stoats are responsible for a huge chunk of this terrifying statistic, because they love to prey on kiwi chicks. At around 1kg in weight, a kiwi is far more street-savvy and able to defend itself from a stoat if it comes face to face with one in the wild. That’s why 1kg is such an important number.

Life at the Napier kiwi crèche

The first four chicks arrived from The National Kiwi Hatchery in mid-October, and by the beginning of December the facility was at full capacity with all 21 kiwi runs being fully occupied (some with two flatmates).

During their 3-4 month stay at the Napier kiwi crèche, the chicks essentially spend their time putting on weight and learning how to look after themselves. Unlike some of their mates who are released to a kōhanga site direct from an incubation facility, they live in large outdoor runs – sometimes by themselves, sometimes with a friend. A specially formulated diet that looks a lot like cat food is put out for them every day, but they also use the time to hunt for worms, grubs, and beetles (and investigate the cameras keeping watch in their runs).

The humans who look after the birds are husbandry manager Bev Wilkinson and kiwi keeper Miriam Strachan. Bev, who has worked in kiwi facilities for more than 13 years says one of her highlights from the last season was noticing the unique personalities of each chick.

“For most of my kiwi career, I’ve moved from department to department with incubating and hatching, so the rearing of chicks exclusively has given me a chance to grow with the chicks and really get to know them,” says Bev. “From Kōrerorero the chatterbox kiwi, to Uno who loved nothing better than sleeping in his food bowl, to Frizz with his frizzy feathers and frizzy wee personality, right through to good ol’ Sheldon who just loved preening and looking good, we had so many chicks with so many personalities!”

Another highlight for Bev was working alongside Miriam.

“The biggest highlight for me was having Miriam join the Kiwis for kiwi team and watching her thrive and learn so quickly. She is immaculate in her work, she thinks out of the square, and she hasn’t been afraid to do something differently. She is a true champ, and her blood is worth bottling.”

Miriam’s highlight of the season was going on her first ever kiwi release.

“Helping kiwi repopulate the wild is just an incredible feeling,” she says. “I had worked with captive kiwi for about three years previously, so when I was given the opportunity to release some of our birds into the wild it was amazing to see where they were going to live and grow up after rearing them from such a young age. Knowing that we have given these chicks a much greater chance of reaching adulthood instead of the 5% chance they would have had if they’d hatched in the wild is incredibly rewarding.”

The end of a season well done

The success of the Napier kiwi creche is the result of many hands making light work. Volunteer groups and local sponsors worked together to clear the facility of weeds and scrub, replant trees and other vegetative cover, build shade shelters for the new residents, and remove any traces of metal from the soil and inquisitive beaks.

Since the Napier kiwi crèche opened its doors, it has been a temporary ‘home away from home’ for 51 kiwi which is very encouraging for its first season. On August 4th, “Tai”, the final resident of the season, was released into the Maungataniwha Native Forest which is managed by the Forest Lifeforce Restoration Trust.

For the next few months, the facility will be quiet – but there’s still plenty of work to be done.

“The end of season will see us try and reduce the amount of paper we use and fine tune a few things,” says Bev. “We’ll be clean, clean, cleaning and preparing the runs for the next season. Weed control and some new planting is on the list too, plus we’re reassessing our trapping processes, getting our DOC traps on Trap.NZ, and making some changes to our predator fence.”

Well done to the team for their incredibly hard mahi over the last season. Thank you to the Napier City Council, along with the sponsors, volunteers, and keen locals whose support has not gone unnoticed. We are acutely aware that we couldn’t do this important work without the support of many.