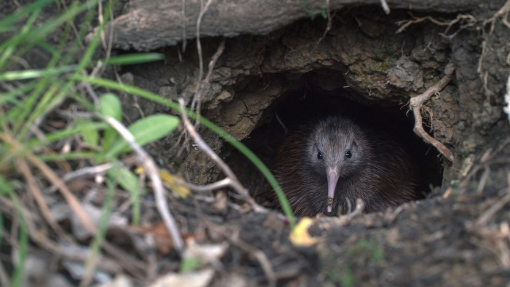 Dogs are important members of many New Zealanders’ families.

But as friendly and well-trained as most of them are, dogs are also one of the biggest threats to adult kiwi.

In 1987, just one German Shepherd is thought to have killed over 500 kiwi (yes, 500 … that’s not a typo) in Waitangi Forest. In February 2021, five kiwi were found dead on the Purerua Peninsula in the Bay of Islands and autopsy reports confirmed a dog attack. And last July, a kiwi was killed by a dog on conservation land in Taranaki then thrown down a bank to hide the evidence.

The kiwi anatomy plays against them

The kiwi’s anatomy is a major reason why they’re so vulnerable to dogs. Because they don’t fly, kiwi don’t have a breastbone to protect their internal organs like other birds do. This means that even the gentlest nudge from an inquisitive pooch has the potential to fatally injure them, even if the dog is only playing.

Kiwi sleep during the day and can’t fly which means they’re essentially a sitting duck to predators. If they come face to face with a dog in the bush, kiwi can’t escape. For dogs that enjoy the chase, chasing a small brown creature that smells interesting could be very tempting.

Injuries caused by dogs can result in a long, drawn-out, painful death for kiwi. Damaged internal organs can cause extensive internal bleeding. Despite a kiwi having a strong kick when provoked, a dog can easily snap their legs too.

“But my dog is well-trained. He wouldn’t hurt a kiwi.”

Regardless of its size, breed, temperament, or training, any dog has the potential to kill a kiwi. For many dog owners, this is hard to swallow. Some dog owners take offence because they think this statement implies that they’re a bad owner or that their dog is unruly. In fact, in many cases where dogs kill kiwi, it’s purely accidental because the dog was only trying to play, and the anatomy of the kiwi doesn’t do it any favours.

Let’s not forget that all breeds of dog come from a long line of hunters. This means that even the most gentle and well-behaved pooch could become uncontrollable when they smell an interesting scent – especially if it’s one they’ve never smelled before.

How to make sure your dog never meets a kiwi

Not all dogs will chase a kiwi – but it pays to be prepared, just in case. Here are six easy strategies that responsible dog owners can implement to ensure even the most well-behaved dog doesn’t come face to face with a kiwi.

If the unthinkable happens and your dog does come across a kiwi and harm it, or if you discover an injured or dead kiwi, please call the Department of Conservation Te Papa Atawhai on 0800 DOC HOT as soon as possible.

Enjoy your summer – but remain vigilant

After a bit of a tough year, all New Zealanders deserve a bit of a break. This summer, let’s work together to ensure our natural wildlife have a great summer too.

Find out how to make sure your dog never meets a kiwi here.